It's been a month or eight since the last newsletter, and we'll just highlight some of the bigger events in that time.

Your Committee, which meets on the third Tuesday of every second month, were elected at the last AGM and are:

We wish them every success and thank them for volunteering their valuable time and skills.

The committee focuses on making the Club responsive to the needs of current members, looking to improve facilities and services while also identifying opportunities to encourage new members and manage the club with an eye to the future. The introduction of state of the art of electronic scoring tablets has been one such project.

If you want to become involved with your Club, either through joining the committee at the next AGM (November 2017) or helping in our fund raising endeavours, or offering help and assistance as a volunteer, please contact Anne Barrowclough or Deborah Tangney.

Don’t be daunted, it’s simple to use and two-thirds of New Zealand clubs already use electronic scoring. Mark Robertson and Sylvester Riddell have been working over the past six months on trialling and testing our electronic scoring system.

"We have deliberately waited before we invested in electronic scoring, to see how it worked out for other clubs and in which direction the technology was taking. It is an investment for our future and we wanted to make the right decision", says Mark Robertson.

"We have opted for handheld mini-tablets, with touch screens, like a rather large mobile telephone", say Mark. Mark added that the devices are easy to use with a bright clear touch-screen display. 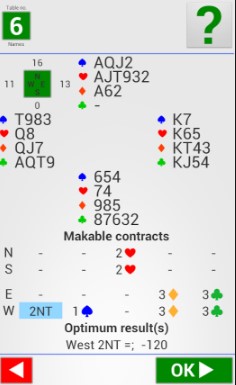 "We're running BridgeTab software from Sweden. They are Android-based, like many mobile telephones. Being such widely used equipment --- about 1.75 billion devices use Android worldwide --- they should be durable and scalable. We've procured 50 tablets for the club. At the same time we switched scoring system to CompScore2, which Patrick Carter and other directors use."

In March and April, we tested the tablets on Wednesdays, Thursdays and Fridays. "So far, so good" says Mark. "We are still learning how to set up the various options on the new scoring computer (Patrick Carter’s domain). We will progressively put the tablets into more use over more sessions as we get more confident. Eventually, they will operate for most events we run including most tournaments".

A special thank you also to Sylvester Riddell - whose technical skills and volunteering of his time has been invaluable configuring CompScore2 and the Android devices. He has installed two new powerful white circular routers on the ceiling of the downstairs bridge room which cover the entire premises.

The benefits of the move to electronic scoring, apart from keeping up with the demands of newer players who now expect electronic scoring, are many, but from the viewpoint of players it’s much clearer and fuller information about the hands, optimal contracts and who did what with the cards.

If you have yet to use them - they are coming, and they are easy and fun!  Watch a 60 second video at https://www.youtube.com/watch?feature=player_embedded&v=PHrTyVinbKE for a flavour of what is coming our way.

A new series of short evening sessions kick off again, led by Douglas Russell, Thursday 4th & 11th May 7.15 pm. The first topics are around responding to 1NT openings.

Stumped by Stayman? Troubled by Transfers? Then Douglas Russell's sessions  for improving players on how best to respond to partner's opening No Trump bids are for you.

Douglas will describe a simple and consistent system of bidding after partner's  NT opening, including Stayman, transfers, Gerber and jump bids. There will be  practice bidding sessions with pre-set hands, and time for questions and  discussion afterwards. Light refreshments will be served.

In addition to the teaching activities, special sessions from expert talkers and running over 700 happenings at the club each year, highlights included …

Our apologies for any unintended omissions from the list!

Your Committee continues to consider options for both the future of the building and use of the site. As they have advised, this is an area where consultation with club membership will happen, and it is expected update meetings will be scheduled later in the year.

Hamilton, 19 Sep to 7 Oct. Events, some short some longer, designed to meet every bridge craving and levels of play. Check the website www.nzbridge.co.nz/congress.html for details.