The last full newsletter for 2015.

This Friday, 4th December at 12:15pm we celebrate a momentous occasion for our member Sunday Millar who will turn 100 on Saturday. Following play on Friday morning, we will have a birthday cake to help her celebrate this tremendous achievement. Study findings in 2000 have shown that Bridge is not only good for maintaining mental health, it also boosts your immune system. Sunday has been playing Bridge for a number of years now, and I am confident that this has played a significant factor in her reaching the Centenary. Congratulations Sunday!

'tis The Season, and thanks to Celia Power for the loan of a Christmas Tree, and Tracey Lewis for decorating, the club has a festive feel about it in the last weeks of the Bridge playing year.

By now you should have received your invoice for your 2016 Club membership fee. Once you have paid this, you will be able to collect your parking sticker for 2016 from the office. The coming years Programme booklet will be available from Saturday at the the Club Restricted Christmas Fun Tournament. The luscious Hot Pink colour should help you to find it when needed through the coming year.

In this months newsletter we bring you

No two Open players can enter as a partnership

Current role at the Club: President

Previous role(s) at the club: player!

Club Member since: too long ago….

First heard about Bridge: as a child – many bridge parties at our house in Wellington

I learnt to play bridge nearly 20 years ago having spent most of my university life hooked on 500. Raising three sons did mean bridge was put on the back burner – but I re-emerged as a regular player at the club about 6 -7 years ago- playing in the evening after work.

I have recently left the security of paid employment as EO at Garden to Table to strike out on my own – providing advice and practical support to small NGO’s.

The hands you usually remember are the ones your partner doesn’t!  You have made a mistake in lead, play or bidding and they prey on your mind – meanwhile you partner has moved on and has no recollection of the hand, let alone the detail. Recently put my partner in 7H, and she nailed it. (I did have a back-up plan with a couple of chocolate santas in my handbag - if it did all turn to custard. A recommended tactic!)

My three sons are not the least interested in bridge – but are fine 500 players so there is hope yet.

My membership of the Auckland Bridge Club has provided me with the opportunity to meet and mix with a wonderful group of people, and make some strong friendships, and great social experiences. 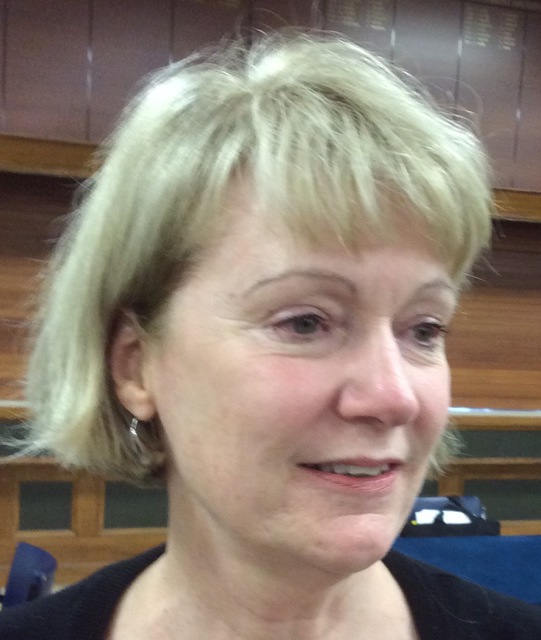 If you read the Congress Bulletin, you may have noticed that the 6th edition mentioned a hand played by our own Sylvester Riddell, prompting his partner, Mark Robertson to nominate Sylvester for Play of the Day.

The Bulletin editor was unable to get the details before going to press, Sylvester was kind enough to share the details for this newlsetter...

After you open the bottom hand 1NT and LHO overcalls 2H, partner shows a good hand with spades and clubs.  You ask for keycards and find that you are missing only the queen of trumps, so you bid 6S.  LHO leads the JD.Examining dummy you see three potential club losers and a trump loser. 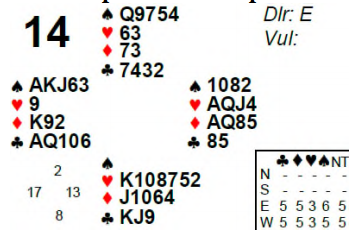 This is a bit disappointing.  This is the second day of the NZ Teams qualifying rounds.  The previous night you had bid two slams, both going off, and were seeking to make amends.  Looking a bit deeper you see that LHO has probably led from a J10 combination, so you may be able to make four diamond tricks, and the ruffing finesse against the heart king is sure to work, so if you find either the QS or the KC on-side you can take 12 tricks - 4 or 5 spades, 1 or 2 clubs, 4 diamonds and 2 hearts.  These plans crumble at trick two when LHO discards on your 2S lead!  So RHO has Q9754 of trumps.  Now you have a certain trump loser and cannot afford to ruff anything because you need all your trumps to draw RHO's spades - you are going to need 3 club tricks.  You play the JS and RHO wins and plays a heart back which you win with the ace.  Now you hold your breath and lead a club to the 10.  It holds!  Then a spade back to your 8.  Then the 10S, a club to the queen, and draw the outstanding spades.  You are pleased to see LHO discard a diamond on the spades.  You take the remaining tricks with the ace of clubs and three diamonds, and you have a happy ending to take back to your team mates.

Friday Afternoon Janet Barnard Rose-bowl Championship Teams: George and Carol Wilkinson, Pauline Andrews and ...Janet Barnard... (that will be an interesting trophy presentation, Janet awarding the Rose-bowl she donated to the club to encourage team events to herself and three team mates)

42 pairs from around the region competed, congratulations to our club members on the following results in this event:

Several of our members traveled to Christchurch for this years Inter Provincial Championship to help defend the title won by the Northland Auckland region last year.

This December Newsletter has been a real challenge for me to get out in a timely fashion, with the numerous seasonal demands that also exist around this time.

In an effort to minimise this next year, while honouring the commitment of 10 newsletters throughout the year, I have developed this rough outline of publication dates, main topic focus and accompanying deadlines.

I have appreciated the feedback I have received thus far on the newsletters since I took on the Editor role. I would like to note that while many people have enjoyed the content, contributions have been slow to come in. Once again, I must ask you for a short paragraph or two to add to the newsletter for our members reading interest...

It has been suggested that a regular feature on one of our longstanding and/or active members, would be an excellent means of introducing these people to those new to our club - would you be interested in writing one to introduce yourself, your bridge partner or mentor?