Yes, November! The years end is within reach. The majority of the 'serious' Bridge playing events are finished for the year, and the remainder of the regional calendar is dominated with restricted or party tournaments and events.

This November edition brings you:

Octobers Interesting Hand- how did Julie and Patrick score 2040 points?

The Club Annual General Meeting is this weekend on Sunday the 8th at 11am.

This is the time for the committee to present their annual reports to us, the membership, and the election of the 2016 committee. In order for the AGM business to be conducted, there must be a significant percentage of membership to attend, which is why we follow with an afternoon of Bridge. If you are unable to attend, please put in your apologies on the paper provided on the West wall noticeboard outside Patrick's office.

Remuera Rise 8B Pairs is on Thursday November 12th and is the final Thursday Tournament for this year.

The annual Club Restricted Christmas Cheer Tournament will be held on December 5th. This tournament is for Club members only. We have one of the largest clubs in the country, and this tournament is aimed to encourage people who have never played together to pair up and meet others they may not otherwise meet. No two Open players may play as a partnership. If you are interested in playing, please put your name on the A3 sized sheets provided on the East wall Noticeboard, so you can be partnered up on the day.

On November 6th Auckland Bridge Club is one of the hosts of the New Zealand Wide pairs. Clubs around the country play the same hands simultaneously, and the results are culminated from every participating club to determine the over all winners. Each club also has their individual session winners, and there are regional winners too.

In addition to being able to see how you compare to every other participating pair in the country, the event also produces booklets which contain each hand, with an analysis of possible bidding and play, according to the editor of the booklet. Last years booklet is pictured on the right.

To ensure there are enough booklets for participants, please pre-enter using the club Pairs Entry form. 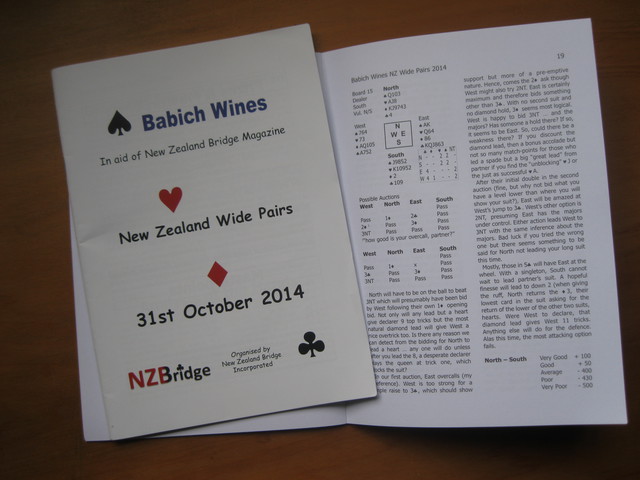 How did Patrick and Julie acquire a whopping 2040 on this hand?

In the last round there was board 2 where our auction went 1D-1S-3C-3D.

1D is a catch all opening showing an unbalanced hand of 9-14 points.

1S is a game forcing relay telling me to describe my hand.

3C said I had 4 clubs, and 5+ diamonds and my spades were shorter than my hearts.

3D was another relay looking for more information.

All of those bids were alerted. (editor's emphasis)

At  that point East doubled with her AJxxx of diamonds without asking what the bidding meant.

I redoubled to show good diamonds and Julie passed.

After a spade lead I ran the 10 of diamonds from dummy and then played a diamond to the 9. I crossed to one of dummy's top hearts and just led spades until East ruffed and I could overruff. Now they were down to just AJ bare of diamonds and I could lead the King from KQ to force out the Ace. So all they made was just their Ace of Trumps.

The score for 3D redoubled making 3 overtricks was 2040.

Congratulations to the following players who won the series and one-off events that finished in, or occurred over October: 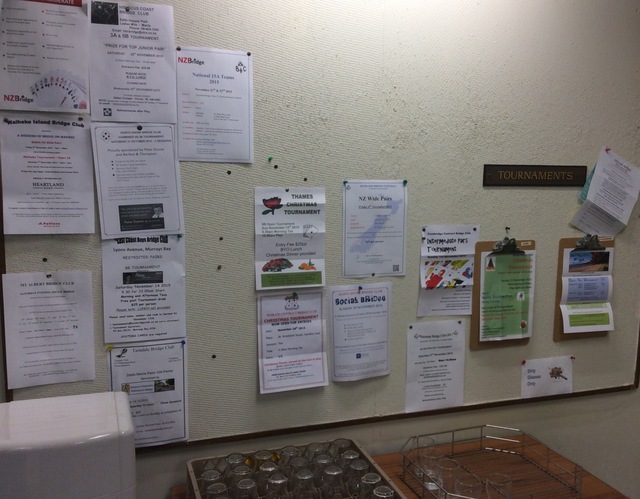 Congratulations to Patrick Carter(Open) and Dave Garrett(Intermediate) who placed second in the open/intermediate and second overall.

Peer Bach and Wendy McTaggart were the top placed Open/Junior pair, with Anthony Hopkins and Lee McGovern second in the same field

Orewa Club hosted their Intermediate 5B and Open 3A on October 24th.

Congratulations to Angie and Chris Fitzgerald who won the Intermediate, and Anna Powell and Joy Watkinson who placed 4th

While Auckland ran the Wes Dodd, Northshore Bridge Club ran an Intermediate 5B and a Junior 3B. Congratulations to Anna Powell and Joy Watkinson who finished 3= in the Intermediate. A good number of our Junior members participated in the 3B, with Robert Mewa/Raoul Daroux placing 2nd, Susan Nunweek and partner 3rd, Bruce Wright/Peter Thomson 5th, Mandy Kelly and partner 6th. Wonderful to see so many of our junior players participating and doing well.

If you would like to play at tournaments around our region, and the top of the Waikato bays region, then check out our "Tournament" notice board, located above the water cooler at the North end of the room, or check out the PDF file at NZ Bridge with every pre-scheduled tournament and event around the country.

Congratulations to Glennis Plamers/Linda Cartner for their selection for consideration to the 2016 Women's national representative Squad and the Senior Squad as their alternate.

Barry Palmer/Neil Stuckey and Douglass Russell and partner for their selection for consideration to the senior squad of the national representative 2016 team. 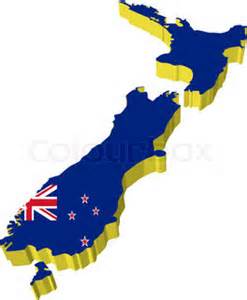 Our esteemed Christine Wilson, after many years of introducing our beloved game to new players, is retiring from the position.

The Auckland Bridge Club Inc aims to provide the best tuition in Contract Bridge in the Auckland/Northland region. Following the retirement of Christine Wilson, we require an experienced enthusiastic bridge teacher to deliver our flagship course of up to 20 sessions of 2 1/2 hours of our beginners' classes on Monday evenings and/or Thursday afternoons, starting February/March 2016.

Person requirements for this position include:

Please apply in writing by email to the Club Office by 12th November attaching your resume and a short covering letter.

The successful applicant will be on term contract for the provision of the course. The Auckland Bridge Club is a charity and was founded in 1931, and hopes to expand it's teaching programme for all levels of bridge.

Under the guidance of Owen Hayward to upgrade some of the building facilities with minimal disruption to members, the women's bathroom has recently had sensor taps installed to minimise water usage and subsequent water costs, as well as new mirrors and sinks.

The workshops were well attended with Bridge players coming from around the region. Participants spoke with enthusiasm over the content and delivery of these workshops, and even those who were initially a little disgruntled at the loss of their playing session on Monday and came, were positive about the experience.

This is your club Newsletter. Your contributions are not only welcome, they promote our club and members within our membership. If you would like to see the newsletter expand, and help towards that, here are some ideas in ways that you could help:

Have an amusing Bridge anecdote?

It has been suggested that a regular feature introducing one of our longstanding and/or active members, would be an excellent means of introducing these people to those new to our club - would you be interested in writing one to introduce yourself, your bridge partner or mentor?

Deadline for the December edition is November 29th