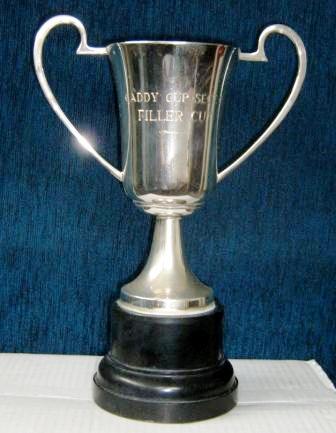 Presidents Pairs Section 2. Ruth presented the Filler Cup to the club in honour of her husband Sol, a lover of life, family, bridge and sports. Sol survived four concentration camps under the Nazis including Auschwitz and lived through one of the Death Marches across Europe. The Russians liberated him in Czechoslovakia in 1945, by which time over 70 his family had perished in the holocaust. Sol was born in Poland and passed away in 1999 aged 77. Australia welcomed Sol and his sole surviving relative, his brother. Ruth and Sol married in Auckland in 1952 and never moved. Sol was a baker and gracefully learnt the mysteries of Lamingtons and Eccles cakes. Ruth’s family also fled Europe and also lost precious family. She arrived in Auckland aged nine and went on OE to Australia in 1951, met Sol, and together had two girls. Despite the common language of German (Sol spent four years as a displaced person in Germany), they made a huge effort to live in English from the day of their marriage. Ruth was awarded the Queen’s Service Order medal in the 2001 New Years Honours List. Sol spoke extensively of his experiences at schools, clubs and organisations such as U3A, Probus and Rotary Clubs. Currently played in November.